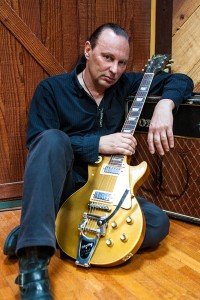 Martin Cilia is Australia’s premier surf rock guitarist and also a member of legendary Australian surf band, The Atlantics. He has released five successful solo albums, with the latest “Electric Christmas” released October 2015. A dynamic live performer, Martin and his band draw songs from his solo albums as well as tunes from the Atlantics repertoire, including the classic “Bombora“.

In June/July 2013 he took his surf sound internationally with a tour to Europe as part of The Atlantics and in August was found with his band touring the USA.

Martin is currently touring with Mental As Anything.

Buy from Bandcamp. This is a high-quality download in MP3, FLAC and more and includes unlimited streaming via the free Bandcamp app.